The politicization of Islam and the journey of Islamism (IV): Islamism during the Interwar Period
NURAY MERT
The German Nazi regime was not only a political power limited to Germany, there are also debates that the regime extends to the Balkans, for example, Albania and Bosnia. This issue is indeed exaggerated in the framework of theses such as anti-Islam or the Clash of Civilizations. However, it can be stated that some of the Muslims living in the Balkans have pro-Nazi tendencies. The Nazi regime was trying to ‘politicize Islam’ in Muslim populated geographies. In the modern era, the reconstruction of Islam as a political identity emerged not only as a result of the Islamic world’s dynamics, but also as a result of the struggles and competitions of countries which have much greater power. The struggles between various states made it easier to use Islam as a political identity. For example, Islamism, which was used to break the power of the USSR in the nineties, is used by the powerful states in the USA and Europe today. Currently, mainstream Western academic habitus and liberal historiography explains the disintegration process of Yugoslavia with the fact that Islam has become a political identity, without much concern about the war between the powerful states in the region. Besides, there is no mention of jihadist Islamic support forces from Muslim countries to Bosnia and, for example, Saudi Arabia and Iran competition. In this study, we will try to understand the founding dynamics of Islamism before the Cold War era, by following the traces of Islamism politics from the Balkans to Japan, by focusing on the development of Islamism between the First WorldWar and the Cold War.
Keywords: Islamism, Nazism, Fascism, Pan-Asianism, Balkans.


Taking stock of the politics of impunity in Turkey from the 1990s onwards: “Crying for justice” in the shadow of war
HÜLYA DİNÇER
In Turkey an integrated politics of justice has not been implemented so far in order to establish accountability for gross human rights violations committed in the recent history of the country. Few official initiatives claiming to ensure remedy and truth-recovery for historical injustices did provide neither the victims of state violence nor society with a just and appropriate reparation. This article explores one of these initiatives, namely the criminal trials initiated between 2008 and 2014. Emerged as a result of the shifting power relations, these trials was an attempt to prosecute serious crimes, such as enforced disappearance, extrajudicial killing, forced migration and torture committed by military forces in the context of armed conflict in the 90s under the emergency rule. All of the proceedings labeled once as “trials for reckoning with the past” ended up entrenching impunity by manipulation of procedural rules and disregarding narratives of the victims. This judicial practice, during which all perpetrators were acquitted and some of the charges were dropped due to statute of limitations, transformed a mechanism of justice into the main source of injustice. Impunity has been further institutionalized by legal regulations adopted during the curfews between 2015 and 2016 and under the emergency rule proclaimed in the aftermath of the attempted coup d’etat with an aim to obstruct the investigation and prosecution of human rights violations perpetrated by security forces. Drawing on these recent developments in the field of criminal justice for state crimes, this article addresses the legacy of the politics of impunity in Turkey while discussing their outcomes with regard to social claims for justice and reconciliation.
Keywords: Right to justice, impunity, peace-building, state violence, gross human rights violations, transitional justice.

The possibilities of subjectivity and agency in Butler’s theory of gender performativity
İLKNUR MEŞE
Butler’s theory of gender performativity is so profound, rich, and complex that it will make us ponder upon all aspects of social life. It further pursues the questions about how social norms constitute us, how they work on us, and how we can struggle within and against these norms. Therefore, it not only ruminates about gender but also performs a wide range of studies ranging from political thinking on vulnerabilities and dispossession. Due to his poststructuralist and Foucauldian position, Butler offers to consider power, subject, and agency as contingent concepts and in dual/ambivalent manner. The significance of his views in the context of the current study is to show that to what extend we are interdependent and dependent on each other as social entities and vulnerable for the very reason; overcoming vulnerability is only through engaging in collective struggle which the sense of responsibility and sensitivity to others’ suffering bring together. It is possible to regard Butler’s urge to think of our limitations as productive political structures which create the conditions enabling to overcome them, as a call for agency to invite us to struggle.

From scientific blind to forced displacement: The ethnicization process of Koçers in Siirt
MUHAMMET ÖKSÜZ
Nomadic communities have attracted attention in almost every period of history. For this reason, nomads were interpreted in different ways depending on time and place. Nomadism is associated with being a Turk in Turkey. Other ethnic groups are ignored. In response to this reductionism, it discusses the existence of the Kurdish nomad group, the Koçers. The study addresses the forced displacement process that Kurds suffered after 1925 and 1984, which had a significant impact on the Kurds’ acquisition of identity, in particular, and of the Koçers. When nomadic status and forced displacement are evaluated together, it reveals the ethnicization of Koçers over time. In order to structurally understand the process of ethnicization of Koçers in Siirt (with a Marxist and anarchist perspective), in-depth interviews were made with thirteen people from different  interlocutors. The aim of the study is to provide the visibility of Koçers and to place it within the Anatolian pastoralism like a marbling. 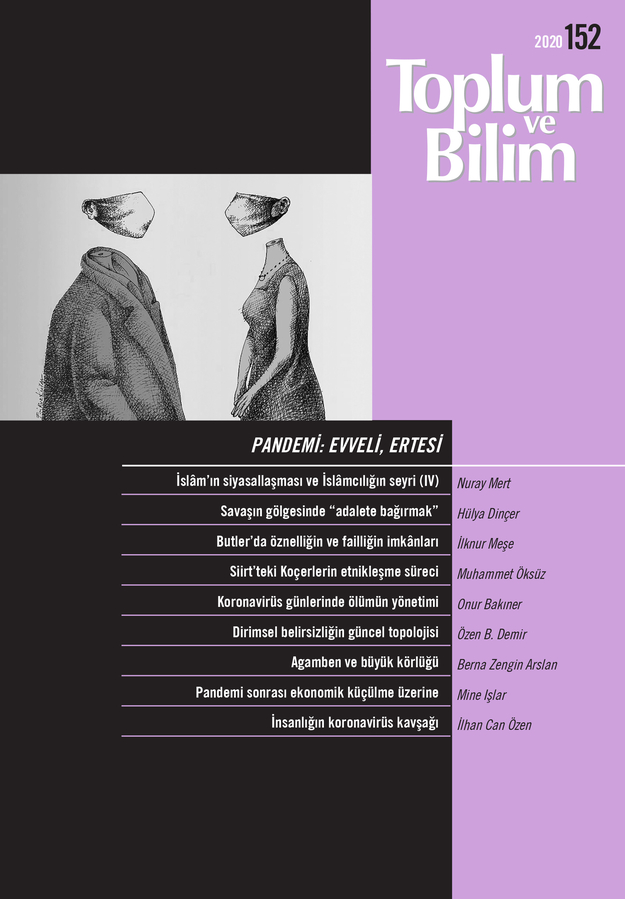