ALP YÜCEL KAYA – YÜCEL TERZİBAŞOĞLU
This article analyses the property tax and property survey of Istanbul in 1874. This new tax and accompanying survey, one of the novelties of the Otoman tax regime put into effect in the second half of the 19th century, was also applied, to varying extents and scope, in Izmir, Bursa, Yanya and Beirut. The novelty of this new property tax was implicit both in its definition, in the expansion of the tax base, and in the techniques employed in the process of registration and recording of the tax and the tax payers. In order to understand the novel aspect of these practices, the article discusses the early tax surveys of the 16th century, then analyses the changes introduced in the 1840s with the income surveys (temettuat), and the accompanying tax regimes. The article then discusses both the methods employed and the consequences of the 1874 İstanbul property survey with respect to the information it provides on the new tax regime, the new framework of property relations in the urban environment, and the impact on urban space. The study summarises and outlines some of the preliminary findings of the authors in this initial exposition of their research on the cadastral practices in the Ottoman empire in the 19th century.
Keywords: Ottoman tax regime, property tax and survey, İstanbul, property relations.

* * *
Tax Collectors, Armenian Question and Administrative Reform in Eastern Anatolia, 1895-1908
NADİR ÖZBEK
This paper examines the tax collecting institution that the Ottoman government established within the context of the Administrative Reform in the Eastern provinces where Armenian subjects constituted an important proportion of the population. Before the reform project was launched it was the gendarmerie’s task to monitor tax collection in the villages; gendarmerie was even responsible for directly collecting taxes whenever there was arrear. Throughout the reform process the government tried to establish a “face to face” relationship with its subjects. The government’s aim was to increase the tax income through implementing administrative technologies of governance and maintaining security and order in the provinces where the central government had remained less visible. However, the concerns of security in the Eastern provinces curtailed the reform project. Instead of establishing a more civilian administrative apparatus in the region the Ottoman government preferred to base its power upon the support of Kurdish tribal forces organized as Hamidian Light Cavalry forces and the immigrant Circassian population recently settled in the region. For the ordinary peasants, particularly the Armenians, the situation became unbearable. This time they suffered from the abuses of not only the so-called civilian tax collectors, but also the abuses of Circassian immigrants and the Hamidian Light Cavalry Forces.
Keywords: Tax Collecting, Armenian Question, Administrative Reform, Hamidian Regime.
* * *
“Heretic“ Tribes and the Hamidian Regime: The Yezidis and Ottoman Administration in the Framework of Military Conscription and Conversion Issues
EDİP GÖLBAŞI
This paper explores the Hamidian policy and practices of conscription and conversion toward the Yezidis, who were conceived as “heretics“ by the Otoman political and religious authorities because of their syncretic religious beliefs. The issue of military conscription dating back to the pre-Hamidian period was characterized by the Yezidis’ resistance to conscription by an appeal to their distinct religious beliefs, rituals, and customs, whereas the Otoman authorities expended considerable energy to “tame” the Yezidis by enlisting them into the army where they would be attempted to transform into an obedient community. The exemptions that the Yezidis were previously granted, however, were regarded by the Hamidian regime as exceptions that needed to be shelved in an effort to bring the community under a firm control. The Yezidis, in turn, would resist recruitment by using various tactics that were soon countered by the Hamidian regime which determinedly devised new technologies of rule and domination. Thoroughly seeking to explore this particular isue, the present study explains the resistance of the Yezidis to recruitment not only in religious terms but also in a broader context of unfavorable effects of universal military conscription, as a modern phenomenon, on conscripts such as discipline, heavy training, demand for obedience, risk of injury or death, mistreatment, disease etc. The last quarter of the nineteenth century also witnessed the the Hamidian regime’s efforts for converting the Yezidis to Islam. This article aims at indicating the strategies and instruments deployed by the Ottoman authorities to convert the members of community, who were believed to have “deviated“ from Islam and begun to worship the devil, ranged from “advice” to oppression and violence, from the building of mosques and schools to distribution of rewards to Yezidi leaders. By connecting the Hamidian conversion policy to the modern state’s desire to create dependable, disciplined, and “civilized“ subjects, this article also insists that the entire process was also shaped by the specific political and social conditions of the Eastern Provinces of the empire. Finally, and most importantly, the article seeks to demonstrate that even though the policies of the Hamidian regime against the Yezidis had a significant impact on the community, they did not achieve the ends desired by the regime. In other words, despite all the efforts and violence that marked the relationship of the state to the community, the Yezidis would never be subjected to regular conscription, nor could they
be converted to Islam en masse.
Keywords: Yezidis, Hamidian regime, military conscription, conversion policies.
Kerem Ünüvar
Sunuş
Yücel Terzibaşoğlu, Alp Yücel Kaya
Tahrir’den Kadastro’ya: 1874 İstanbul Emlak Tahriri ve Vergisi “Kadastro tabir olunur tahrir-i emlak”
Nadir Özbek
“Anadolu ıslahatı”, “Ermeni sorunu” ve vergi tahsildarlığı, 1895-1908
Edip Gölbaşı
“Heretik“ aşiretler ve II. Abdülhamid rejimi: Zorunlu askerlik meselesi ve ihtida siyaseti odağında Yezidiler ve Osmanlı idaresi
Bülent Bilmez
Arnavutluk’ta Osmanlı tarihi araştırmaları ve tarihyazımında modern Osmanlı
Şükrü Aslan
Yazarın zihin dünyasının dışından okumak: Sıdıka Avar’ın Dağ Çiçeklerim adlı kitabı üzerine düşünceler
Fuat Dündar
Aktar ve Kırmızı’nın eleştirisi vesilesiyle: Algılama ve ölçüyü tutturma sorunu
Özetler 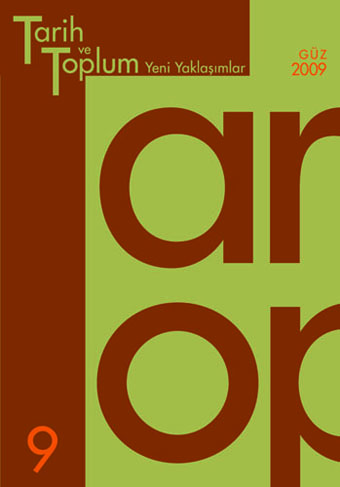