Capitalism as a food regime and the agrarian/peasant question
ATAKAN BÜKE
This article via re-conceptualizing the concept of food regime as capitalist food regime, suggests to reconsider capitalism itself also as a food regime, whose defining tendency is the reduction of human-human and human-nonhuman relations to (surplus-)value production. This reconceptualization attempt is, on the one hand, a product of interrogations on the theoretical implications of the neoliberal globalization processes of capitalist agrifood relations. On the other hand, it is a product of a search for ways out of the theoretical-political impasse of the contemporary agrarian/peasant question literature, which is manifested in the divide between political-economic and post-developmentalist understandings. The possibility of re conceptualizing the concept of food regime, which is used in the related literature rather as a tool for periodization of the history of agrifood relations, is the understanding of Marxism not as a form of political economy, but as a critical theory of society. This article argues that via the capitalist food regime formulation, the strengths of both political economic and post-developmentalist frameworks can be brought together, and a theoretical-political ground can be established, which would enable us to move beyond the impasse of the agrarian/peasant question debate. Within this framework the main tendencies characterizing the capitalist food regime can be pointed at two interrelated levels: (1) primitive accumulation, not only as a historical foundation of capitalist relations, but also as the mode of existence of capital; (2) dissociation of the historical, social and ecological links among agriculture, food, rural, and nature; and thereby, disarticulation of food from rural, agriculture and nature. According to this formulation, peasants neither possess an eternal ethico-political character as it is assumed by post-developmentalist approaches, nor are they belong to a social category that can never become a class as it is argued by the political-economic understandings. Rather, peasants, as it has become much more apparent in the neoliberal restructuring processes, are emerging as a political subject on the basis of class formation processes in and against the capitalist food regime.

Financialization, dispossession, and entrepreneurial exploitation in Turkey’s agriculture: Agricultural credit use and its potential outcomes in the aftermath of the Great Recession
YETKİN BORLU
Over the half of Turkey’s agricultural land is operated by small farms, which present an ideal example to display the impact of the credit expansion in the aftermath of the Great Recession. This study discusses the extent to which Turkey’s agriculture can be understood through the lens of the “accumulation by dispossession” perspective. I discuss the period between 2007 and 2017 with the help of the descriptive statistics on agricultural land use, agricultural employment, agricultural credit markets, debt ratio, and commodity markets. I propose that the areas in the financialization and debt literature not addressed by the dispossession perspective point to a need for research regarding the impact of debt pressure on the corporate commodity chains. Finally, I argue that dispossession is not the only consequence of credit expansion as the debt cycle can turn into a continuous form of exploitation in commodity exchange relations. Future studies on financialization need to take the role commodity chains into consideration.

Agro-food system transitions? Exploring alternative agro-food initiatives in İzmir
EMEL KARAKAYA AYALP
This study searches emerging Alternative Agro Food Systems (AAFSs) in Turkey and does so by focusing on three niche initiatives in İzmir. Building on Regime Theory and the Multi-Level Perspective, it views these initiatives as strategic niches and explores their development processes. The development processes of niches are evaluated in the historical context of transformation of agricultural structure in Turkey and food regimes in the World. The research method used in this study is exploratory qualitative multiple case study. Case study exploration is undertaken by three niche initiatives in Izmir; (a) producer initiated Alternative Agro Food Niche - Gödence Cooperative, (b) consumer initiated Alternative Agro Food Niche BİTOT (West Izmir Community Supported Agriculture Group) and (c) producer-consumer collaborated Alternative Agro Food Niche-Foça Earth Market. Case studies reveal characteristics and development processes of alternative food initiatives. Gödence revealed a niche that shows a degree of compatibility with the incumbent regime. This compatibility blunted the innovative capacity of the niche due to several structural reasons and path-dependencies. On the other hand, BİTOT and Foça Earth Market formed new niches. The creativity, talent to widen voluntarism and existing networks of organization provides BİTOT a web of volunteers to create, design and apply innovative practices. Foça Earth Market’s unique innovation capacity is lying under its artifice to use incumbent regime institutions and actors while creating alternative practices.

Socio-economic change in agriculture and rural areas in Turkey
MURAT ÖZTÜRK, FERHAT KENTEL, PERRİN ÖĞÜN EMRE
This article provides a general and current assessment of agriculture and rural spaces in Turkey. The study is mainly based on the results of the TUBİTAK research project “The Socio-Economic and Cultural Transformation of Rural Space: Modernising and Disappearing Traditional Spaces and Meanings” of which Ferhat Kentel was the director and Perrin Öğün Emre and Murat Öztürk were researchers. We offer a methodologically distinctive approach, by analysing the developments in agriculture that have historically been influenced by different dynamics together with the developments in rural populations and settlements. In Turkey, agricultural production increased with rises in both employment and productivity until 1948. Thereafter, it continued to grow with the opportunities enabled by mechanization and then green revolution. While the increase in agricultural employment started to reverse after 1990s, the decrease in rural population and agricultural lands have already begun in 1980s. We claim that, as the limits of agricultural lands were reached in 1970s, the decrease of rural population can be explained through the effects of neo-liberal policies followed in the 1980s. The search for jobs outside agriculture can be explained by neoliberal policies that have limited the opportunities for the future generations in the rural, as well as the cities emerging as attractive sites. However, a reverse migration towards the countryside is also witnessed, which started to develop after 1980 and especially during the years of economic crises. The increasing demand for traditional food products as well as a lifestyle which appropriates nature and rural life as an alternative for urban life are also reasons for the reverse migration. The fact that most of the agricultural production is carried out by small-scale peasant farmers in the recent past and today can be associated with the existence of an environmentally friendly and healthy crops producing agriculture which has emerged as a potential alternative to mechanized-chemicalized agriculture.

Is “New Peasantry” or “New Labour” arising in the process of agrarian transformation?
DENIZ PELEK
Turkish agriculture has undergone a dramatic dissolution process since the 1980s as part of the broader neoliberal policies, globalized food market and growing urbanization. While unpaid family workers migrated to metropolitan areas, small farmers managed to survive. In the Turkish literature, an “undissolved” structure of the small and medium scale farmers was examined by the New Peasantry aprroach that focuses on survival strategies of small producers such as income diversification, crop transition and maintenance of the conventional social relations in the villages. This study will demonstrate the shortcomings of the New Peasantry approach and assert that seasonal agricultural workers –who are integrating in the market by varying status such as internally displaced, refugee, landless and asylum seeker as a result of internal and external migratory movements– play a curial role in the survival of small farmers. Contrary to the works that centralize “small farmers” or “peasantries” in the Turkish literature, this article suggest to consider labor and small farming together in the analysis of the process of agrarian transformation.

Microbiopolitics of pasture-cheesemaking: Dairy technosciences and Kars Kaşarı Geographical Indication
MEHMET FATİH TATARİ
This article examines the transformation of pasture-cheesemaking in the face of a national politics favoring industrial dairy farming and implementing food safety regulations in the last 20 years in Kars, Turkey. After offering an overview of what kind of protective measures geographical indications of dairy products can provide for pasture cheeses in capitalist food regime, I introduce the process that led to the official legislation of the Kars Kaşarı Geographical Indication in 2015. I analyze the food safety regulations that were introduced in 2004 to show that they aim to control human encounters with microbial life forms based on the scientific knowledge of particular bacteria in pasture cheeses and their potential harmful effects on human health. Drawing from Paxson (2008), I call this control mechanism ‘microbiopolitics of pasture cheeses’ and I argue that it makes local practices of cheesemaking (and the animal husbandry practices that sustain them) disposable. In the last section of the article, I focus on the convergence of artisanal and microbiological dairy knowledges in the emerging cheesemaking practices and discuss the possibilities they offer within and beyond this microbiopolitics. This article on the one hand makes the agency of nonhuman microbial life forms visible by conceptualizing cheesemaking as the governance of the microbial ecologies of milk. On the other hand, it highlights the limits of understanding science and technology as inevitably reducing social relations into technical expertise by analyzing new collaborations established among farmers and scientists thanks to the geographical indication.

The commodification of the corpse: Capitalism, political economy of the body and the birth of the cadaveric trade
MURAT ARPACI
This paper discusses the historical relationship between the birth of capitalism, the clinic, and the cadaver trade. This historical relationship between body and capitalism can be understood within the framework of Marx and Engels’ analysis of capital-power and Foucault’s analysis of knowledge-power. In capitalism, while producing material value, the body is physically depleted and symbolically devalued. The body, which is the object of capital power based on the working regime, turns into the knowledge object of the medical view as a cadaver in case of death. As the cadaver is valued for medical knowledge, the supply-demand cycle of the capitalist market responds to this need. The study, deals with the body-politics of capitalism in the cadaveric trade. Capitalist society historically depends upon a market ideology based on the devaluation and commodification of the bodies of the poor. The bodies of the poor are trivialised and commodified both in life and death. The cadaveric trade, which has emerged simultaneously with capitalism, is a concrete example of this commodification. The cadaveric trade depends upon the commercialization and economic circulation of the dead bodies of the poor. In this study, the fundamentals of cadaver trade and the capitalist body regime are discussed relationally. 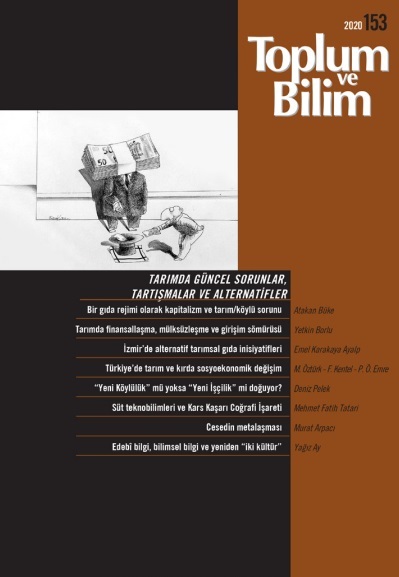