The political strategy led by Luís Inácio Lula da Silva and Dilma Rousseff of the Partido dos Trabalhadores (Workers’ Party - PT) depended on their administrations’ ability to unite various capitalist factions and the working class around a shared hegemonic project which allowed increasing the income of labor and reducing poverty while maintaining the acquisitions of financial and productive bourgeoi- sie. This article identifies the mechanisms and strategies of the PT administrations which enabled them to organize a seemingly stable class-coalition pact. It also reveals that the change in the international economic and political environment that enabled such a pact and the loss of the ability to mediate the different demands and desires of the Brazilian bourgeoisie and the working class brought the end of PT populism. The role of the ruling PT in co-opting, assimilating and alienating the lower classes helps explain the feebleness of the popular reaction to Rousseff’s im- peachment and the unforeseen election victory of Jair Bolsonaro.

Mexico: The era of the Cuarta Transformación (4T)
ERTAN EROL

It has been almost two and a half years since the leftist Andrés Manuel López Obrador took the presidency of Mexico, and the country entered a self-proclaimed ‘Fourth Transformation’ (Cuarta Transformación -4T) period. Even though López Obrador has come to power with a landslide victory in the 2018 presidential elections, the opposition towards the 4T never lost its momentum, starting with the rightist and conservative politicians, intellectuals, business groups and media outlets but also including environmental activists, feminist organisations and indigenous movements. At the same time, a ‘leftist’ turn in Mexican politics had indeed ushered serious social and economic changes on both national and international contexts. This work aims to analyse the political and economic crisis that inevitably paved the way to this recent shift in Mexican politics. It also tries to analyse the capacities, limits and contradictions of the 4T through questioning the possible changes within the class composition of the political power and economic structures.

Poland was shown as one of the bright examples of implementation of market reforms accompanied by democratization in the 2000s. Yet, it entered the path of authorianization, where the rule of law eroded, and xenophobia and discrimination increased after 2015, when Law and Justice Party (PiS) came into power. This study seeks answers to two questions from the critical political economy perspective: Which factors led to the rise of nationalist-conservative right-wing populists to come to power in Poland? How should the post-2015 political economic order be defined? Regarding the first question, the paper suggests that the polarization-based power strategy of PiS has been effective under three conditions: (i) the regression of the institutional, organizational and political power of the working class, and the decline of left-wing politics, (ii) the effects of the global financial crisis, (iii) PiS’s successful political entrepreneurship. As for the second question, the paper argues that an authoritarian post-neoliberal regime is on the rise under the PiS government. Unlike the experiences in Latin America, three dynamics were in- fluential in the post-neoliberal project in Poland: (i) the acknowledgement of the economic nationalism movement, which was led by the local managers of multinational companies, by the state managers, (ii) the PiS government’s initiative to establish a ‘national capitalism’, resulting in the re-Polanization of companies in critical sectors, (iii) the establishment of the new conservative welfare regime. nFinally, the paper emphasizes that the authoritarian aspect of this post-neoliberal project does not only stem from the xenophobic and discriminatory ideology of PiS, but also from the exclusion of subaltern classes from the decision-making processes.

Hungary: The Fidesz government between neoliberalism and national-conservatism
JOACHIM BECKER
The article distinguishes two main nationalist currents in Hungary: neoliberalism and national conservatism. It provides a classification of the main characteristics of the two currents. Within this theoretical framework, it analyses the state project, the economic and social policy of the Fidesz governments. It refers particularly to the Hungarian debate on the character of the present Hungarian regime and the new emerging domestic bourgeoisie which is intimately linked to the ruling party.

The activities of this new bourgeoisie are basically confined to services and construc- tion while transnational capital continues to dominate in export manufacturing.

The article concludes that national-conservative measures benefit mainly the new domestic bourgeoisie and the upper middle class as the strategic support base of the Fidesz regime. Neo liberal economic and social policies prop up foreign capital in manufacturing and discipline workers and the poor. Thus, the specific mixture of national-conservative and neo-liberal elements serves a well-defined class project.

13 successful and 9 unsuccessful military coups, the most recent being in 2014, re- veals the character of modern Thai political history. Thailand, with a lack of tradition of parliamentary democracy, became the epicentre of the devastating South-east Asian economic crisis in 1997. After the crisis, the military and civil bureaucracy, who had had actual or de facto control over the political power in the country, had to share power with Thaksin Shinawatra and his party TRT (Thai Rak Thai, Thais Love Thais), who came to power in 2001 elections. Having a neoliberal populist political line, TRT represented the lower classes, on the one hand, and the new capital segments that rose especially as of the 1980s, on the other. The military coup that took place in 2006 removed Thaksin from power, polarized the country between Thaksin supporters and opponents. This article mainly focuses on the social and political conflicts took place between the 1997 crisis and the 2014 military coup. The aim is to reveal the strict relationship between political conflicts and class tensions which have acquired a geographical and spatial character as a result of the uneven development of Thai capitalism.

On methodological limitations in the current studies of authoritarianism
MELEHAT KUTUN

Today, in many countries including Turkey, political powers intervene in social relations sphere with more authoritarian policies. It is also articulated by different circles inside the liberal approaches that these interventions have started to pose a danger to both international economy and democracy. However, because of the prominent problem in these assessments that share a common point that state, society, and economy relations have transformed and even the minimum principles of parliamentary democracy have not been met, neoliberalism and authoritarianism are placed on two opposing poles. This causes the main roots of authoritarianism to be explained as moving away from neoliberalism, leaving the essential components of the issue out of the analysis. Therefore, the aim of this study is to establish what common methodological limitations of the prevailing mainstream institutionalist analyses in the current studies on authoritarianism are by focusing on their main arguments. This study asserts that complicated social relations could be more explicated through a historical-relational approach. It highlights method- ological limitations of these analyses in question which have a significant weight in the studies on Turkey by focusing on their prominent arguments; and it sees this as an important step regarding the transcending existing democracy studies.

This article aims to analyze the Turkish state’s neoliberal transformation, which started in the 1980s, acquired an Islamist character after the AKP’s coming to power in 2002 and an authoritarian coercive one in the 2010s, within the context of financialization dynamics. Having identified capital’s deepened subordination over social relations as a whole, including labour and state, via financialization processes at the global level, the article highlights the general and world-historical pressures this change has engendered on the capitalist form of the state, and problematizes the current rise of a personalized, privatized, centralized and unaccountable administrative practice in Turkey as the AKP’s historically specific responseto this global political transformation. The article mainly argues that the AKP has been reproducing the Turkish state as a crisis state since the 2010s in order to preserve its power at the expense of the sharp limits imposed by the financialized market discipline on the state, a process that has been also dissolving the state’s modern democratic/parlamentarian institutional structure historically.

Apparatuses of denunciation, neoliberal governmental rationality and the potential for a fascist turn: The case of Turkey in the 2010s
BİRİZ BERKSOY

This article explores the socio-political causes behind the proliferation of the ap- paratuses of denunciation in Turkey in the 2010s, the official calls for denunciation and the escalation in the number of citizens denouncing their fellow citizens.

These developments have taken place within an international context which is marked with the emergence of “security states” in core capitalist countries such as the United States, United Kingdom, Canada in the post-9/11 period, and the initiation of campaigns mobilizing citizens to watch for suspicious behaviors that potentially signify “terrorist” activities. In Turkey, the establishment of the Communication Center for the Office of the President (formerly Prime Minister, 2006), formation of police hotlines/websites (e.g., ALO 140 Terrorism Hotline, 2016) and community policing networks, mobilization of neighborhood heads (muhtar) for denunciation, re-activation of the night-guard system (2016) and the adoption of legal statutes enabling denunciation are significant parts of this process. It is argued in the article that the mechanisms of denunciation surfaced as part of the “security states” that emerged in the late 1990s under the dominance of neoliberal governmental rationality which encompasses certain components that create a fertile sociopolitical fabric both for the materialization of fascist tendencies and a preference for denunciation as a governmental technology. Accordingly, the apparatuses of denunciation in Turkey arguably emerged at a point where the “securitystate” constructed by the Justice and Development Party (Adalet ve Kalkınma Partisi, AKP) government in its second term (2007-2011) has delivered a fascist turn within the context of the 2008 global economic crisis. 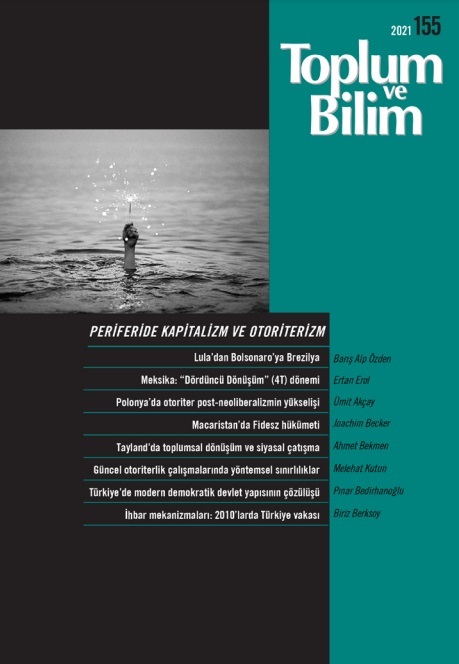