Beginning from the nineteenth century, the rulers of Ottoman Empire realized the importance of education in centralizing the administration. The Ottoman subjects would be educated in accordance with the basic principles of the ruling mentality. In this manner, for the rulers, education created on the one hand a way to form the subjects and on the other a way to control them.

In the Hamidian era, such developmental features of education came to be observed more obviously. Primary education, as part of these developmental features, was considered as the first step for the formation of the subjects. Thus, the policy of spreading the primary schools came to be the main educational policy. However, could a central program be effective in spreading education in the villages? In the villages the most crucial issue was to produce enough for the next years, therefore everything about agricultural production dominated people’s lives. Hence, the spread of education in the villages was determined by agrarian economy; by the financial and social conditions that it created and by the actors who benefited from these conditions. Consequently, the villages remained between the central policy and such conditions that agrarian economy determined. Therefore, the spread of education in the countryside is the story of the struggle between central efforts and the agrarian economy. And the understanding to the history of the education will be incomplete without a deep observation of the countryside, and an analysis of this struggle.

Salonika was on the one hand a region of agricultural prosperity and diversity on the other its city center was one of the developed places in terms of education. Therefore, the region of Salonika presents a perfect example to observe the abovementioned conditions.

The character of the Sharif Hussein’s revolt is undoubtedly one of the most controversial issues of the late Ottoman Arab historiography. it has been accepted as an important turning point in nation-building processes of Turkey, Syria, Iraq, Jordan and Palestine by the founders of these states. Although it is well-known in the existing academic literature that the Sharif’s Revolt does not have Arab nationalist aspirations, the relationship between the policies of the Committee for Union and Progress and that of the revolt has not still been analyzed sufficiently. Aiming at revealing this relationship, this article sets out to examine impact of the Unionist centralization policies to the Sharif Hussein’s movement with reference to the Ottoman and German documents.

An Important Organisation of the Transformation of the RPP: RPP's Research and Documentation Bureau

The Republican People’s Party established a bureau namely Research and Documentation Bureau in January 1958. This bureau had key role in the transformation of the RPP. The most important input for RPP’s becoming a more responsive party on electors’ economic and social questions was provided by bureau’s publications. The most important works of the Research Bureau was conducted in the era between 1958 and 1961 although the bureau was operational until 1965. The most important goal of this paper is to examine the influence of the bureau which is not well known and has not come to the fore on RPP’s change in the subsequent period. 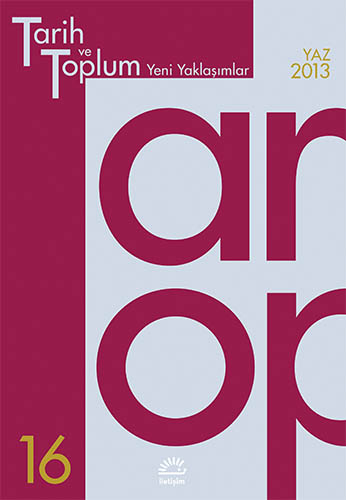