This article deals with the perception of the Anatolian Turkish-speaking Orthodox of their identity and how they were perceived by the Greek speaking members of the Ottoman Rum millet in the context of the crisis that erupted in the first months of 1910 between the Patriarch Joachim the III and the members of the Holy Synod. Based on the polemics that emerged in the press the article seeks to demonstrate that even in the beginning of the second decade of the twentieth century the Greek Orthodox community of Istanbul was linguistically, culturally and socially far from homogeneous. The Turkish-speaking Anatolian Orthodox members of this community were ridiculed and stigmatized with stereotypes such as being rude, uneducated and lacking manners and their low social status is criticized. A second emphasis of the article connected with the abovementioned is that the term “Karamanli” that today is widely used in the Ottoman historiography to describe the Turkish-speaking Anatolian Orthodox, in daily usage formed a pejorative, stigmatizing label invented by their Greek speaking coreligions. The term itself had defamatory connotations and implied ignorance, roughness, lack of manners, low socioeconomic status of the Turkish speaking Anatolian Orthodox and thus, they mostly reacted and rejected to be named as such.
Keywords:Joachim the III, Greek Orthodox community of Istanbul, Karamanli, Karamanlidhika, Ottoman Greek press, Turkish-speaking Anatolian Orthodox.
* * *
Baha’is and Young Turk Revolution
NECATİ ALKAN

The Young Turk Revolution of 1908-1909 was a turning point that opened up new prospects for Ottoman society and politics. It created a milieu in which new ideas could be shared in a relatively open manner. The case of the Baha’is in Palestine, even though they were seemingly a small unimportant community among the religious communities, is a good example for the dissemination of reformist thoughts in that period. Based on unpublished letters of the Baha’i leader ‘Abdu’l-Baha (‘Abbas Effendi) written in Ottoman Turkish, this article deals with the post-Revolutionary relations between him and the Young Turk elite. These letters provides us information about how and through whom he was released after fifty years imprisonment and his thoughts and approach towards the Committee of Union and Progress (CUP). In this study I discusses the contributions of Baha’u’llah, founder of the Baha’i faith, and his son and successor ‘Abdu’l-Baha to the reform discourse in the Ottoman Empire; the tense relationship between ‘Abdu’l-Baha and Sultan Abdülhamid II; how the supposed architect of the “Incident of 31 March” Derviş Vahdeti sought support from ‘Abdu’l-Baha; the latter’s previously unknown connections with some leading Young Turks, and his attempt to infuse Baha’i thoughts into the CUP. The chapter is rounded up with an overview of the declining relationship between the CUP and ‘Abdu’l-Baha during World War I.
Keywords:Baha’is, Young Turk Revolution, ’Abdu’l-Baha (‘Abbas Effendi), Derviş Vahdeti
* * *
Ramadans and the formation of Kemalist secularism (1923-1938)
SEVGİ ADAK

This article looks at the specific applications and reflections of Kemalist secularist policies in different domains of social and religious life in the early republican era by focusing on the transformation of ramadan from the Ottoman Empire to the republic. It tries to decode the Kemalist state’s regulatory role in this transformation, and to understand to what extent and with which mechanisms Kemalist secularism could shape and influence the ramadan life, and therefore, the role and visibility of religion in the public sphere. Being an intensive religious time for Muslims, including several collective religious practices, the change in the way that ramadans were experienced and the role of the state in this change appear as a case through which some conclusions can be derived about Kemalist secularism. It is argued that rather than a solid project, the application of which was planned from the beginning, Kemalist secularism followed a gradual path. Without denying the fact that secularism was a crucial part of Kemalist ideology from the beginning, it is emphasized that Kemalist secularism, with its scope and practical applications, did find its form gradually, by adopting itself to the necessities of the context and in relation to reactions from the society. In other words, this article suggests a reading of Kemalist secularization as a relational process, contingent upon the relationship between the political authority and society, and the dynamics of state formation.
Keywords:Kemalist secularism, Ramadan, Early Republican Turkey
* * *
A cultural and historical treatise on 1950’s popular culture magazines: Bütün Dünya and Hafta, 1948-1956
FULYA ÖZKAN

This article examines two popular culture magazines published during the early 1950’s, Bütün Dünya and Hafta. The pages of these two magazines were full of articles inculcating the merits of entrepreneurship. In the framework provided by this notion, lateral discourses focused on subjects like creativity and originality. Consequently, many articles gave the message that collectivity was dead and objective determiners outside of the will of particular individuals were ineffective. All that mattered was the subjective workings and internal resolution of the individual. This picture gave birth to a particular notion of time and religion. Accordingly, time was equated with and measured in terms of money and the alertness of the entrepreneur implied the reduction of the totality of time just to the present where the past and the future, and related to this, history and hopes did not matter. The meaning of religion was narrowed as well. It was fine-tuned in the hands of the so-called entrepreneur who used it according to the rules of “instrumental rationality.” All these points indicated just one phenomenon: becoming rich through the easiest way in which the source of wealth remained secret. However, the discourse of these two journals had also a more or less realistic aspect in that it tried to limit the extent and feasibility of this ideological worldview. Accordingly, each individual was supposed to possess one particular talent which drew the boundaries of the realm of her social mobility. The discourse of both magazines was contradictory in another respect as well. While advocating an industrious work ethics, they simultaneously depicted via articles about far away tropical islands, paranormal phenomena, or space another picture in which the constraints imposed on every day life by civilization were criticized and a route to a different way of living was provided by notions of another time, space, and dimension. Thus, these journals had an ideological framework which was not “closed” in itself. Moreover, articles about the experiences of the real people in Hafta revealed that discursive messages were only effective to the extent that they had some practical connotations in people’s everyday lives.
Keywords:Bütün Dünya, Hafta, Democrat Party, Modernisation, Popular culture, Magazin
Kerem Ünüvar
Sunuş
Stefo Benlisoy, Foti Benlisoy
“Karamanlılar”, “Anadolu ahalisi” ve “aşağı tabakalar”: Türkdilli Anadolu Ortodokslarında kimlik algısı
Necati Alkan
Bahailik ve Jön Türk devrimi
Sevgi Adak
Kemalist laikliğin oluşum sürecinde ramazanlar (1923-1938)
Fulya Özkan
1958’lerin iki magazin dergisinin kültürel ve tarihsel bir incelemesi: Bütün Dünya ve Hafta, 1948-1956
Kerem Ünüvar, Kaya Şahin
Cornell Fleischer’le söyleşi: Osmanlı İmparatorluğu’nun “altın çağı” ya da 16. yüzyılda bir imparatorluk resmi
İlkay Yılmaz
Erik Jan Zürcher’le söyleşi: Uluslararası Sosyal Tarih Enstitüsü’nün 75. yılı
Birsen Talay Keşoğlu
Son dönem Osmanlı’da Türk kimliğinin oluşturulmasında kadınlara biçilen roller: Milliyetçilik ve Türk Kadını
Özetler 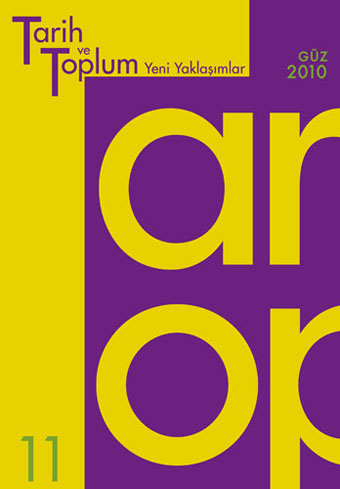